Link to My Vital Connection University Intro Webinar
"Alternative Medicine" or Advanced Health Care?
http://www.vitalconnectionuniversity.com/course/category.php?id=4
Dr. Rima on GHSI: This is a threat to your business or practice!

Posted by Health Freedom of Choice Blog at 7:14 AM No comments:

This Archive Posting is to provide a convenient place for me to post the Herbalists Charter and several modern Health Freedom Declarations.


Introduction
When the American Colonies declared their independence as Sovereign States, in July, 1776, they each adopted the Laws of England as the Common Law of the State.

Among the Laws of England so adopted is the Herbalists' Charter, an Act of Henry the Eighth (in the 33rd Year of his reign - 1542 and adopted thereafter by Parliament: Statutes at Large34&35 Henry VIII. C8. A Bill that Persons, being no common Surgeons, may minister Medicines, notwithstanding the Statute). It is astonishing to note that many of the issues confronting alternative practitioners today are the same issues that the Act of Parliament addressed.

In the Sixteenth Century, as in the 21st Century, licensed physicians and surgeons were going to Court to ban the activities of the alternative practitioners of their day, the herbalists. Parliament ordered an end to this misuse of the Courts to enforce licensure, protecting the nutritionists from "suit, vexation, trouble, penalty, or loss of their goods..." This ancient Act of Parliament applied to England and the King's "other dominions" including, of course, the American Colonies, and later, States. This Act has never been repealed, and thus remains part of our Common Law to this day, offering protection to alternative practitioners, "at all Time from henceforth..." as a perpetual Charter of Rights. 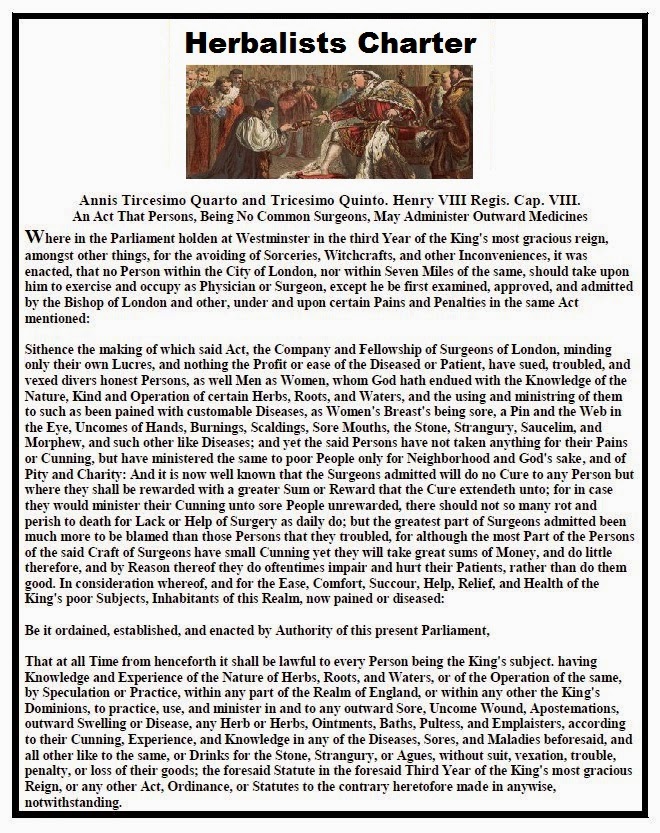 "An Act that Persons, Being No Common Surgeons, May Administer Outward Medicines

"Where in the Parliament holden at Westminster in the third Year of the King's most gracious Reign, amongst other Things, for the avoiding of Sorceries, Witchcrafts and other Inconveniences, it was enacted, that no Person within the City of London, nor within Seven Miles of the same, should take upon him to exercise and occupy as Physician or Surgeon, except he be first examined, approved, and admitted by the Bishop of London and other, under and upon certain Pains and Penalties in the same Act mentioned;

"Sithence the making of which said Act, the Company and Fellowship of Surgeons of London, minding only their own Lucres and nothing the Profit or ease of the Diseased or Patient, have sued, troubled and vexed divers honest Persons, as well as Men and Women, whom God hath endued with the Knowledge of the Nature, Kind and Operation of certain Herbs, Roots and Waters, and the using and ministring of them to such as been pained with customable Diseases, as Women's Breasts beings sore, a Pin and the Web in the Eye, Uncomis of Hands, Burnings, Scaldings, Sore Mouths, the Stone, Strangury, Saucelim and Morphew, and such other like Diseases; and yet the said Persons have not taken anything for their Pains or Cunning, but have ministered the same to poor People only for Neighborhood and God's sake, and of Pity and Charity:
"And it is now well known that the Surgeons admitted will do no Cure to any Person but where they shall be rewarded with a greater Sum or Reward that the Cure extendeth unto; for in the case they would minister the Cunning unto sore People unrewarded, there should not so many rot and perish to death for Lack or Help of Surgery as daily do; but the greatest part of Surgeons admitted been much more to be blamed than those Persons that they troubled, for although the most Part of the Persons of the said Craft of Surgeons have small Cunning yet they will take great sums of Money, and do little therefore, and by Reason thereof they do oftentimes impair and hurt their Patients, rather than do them good.

"In consideration whereof, and for the Ease, Comfort, Succour, Help, Relief and Health of the King's poor Subjects, Inhabitants of this Realm, now pained or diseased:

"Be it ordained, established and enacted, by Authority of this present Parliament, That at all Time from henceforth it shall be lawful to every Person being the King's subject, having Knowledge and Experience of the Nature of Herbs, Roots and Waters, or of the Operation of the same, by Speculation or Practice, within any part of the Realm of England, or within any other the King's Dominions, to practice, use and minister in and to any outward Sore, Uncome Wound, Aposelmations, outward Swelling or Disease, any Herb or Herbs, Ointments, Baths, Pultess, and Emplaisters, according to their Cunning, Experience and Knowledge in any of the Diseases, Sorea and Maladies beforesaid, and all other like to the same, or Drinks for the Stone, Strangury or Agues, without suit, vexation, trouble, penalty or loss of their goods;

"The foresaid Statute in the foresaid Third Year of the King's most gracious Reign, or any other Act, Ordinance or Statues the contrary heretofore made in anywise, not withstanding."

With greatest appreciation, for bringing the Herbalists Charter to my attention,
and for his many other good works, dedicated to the late homeopath and attorney,
Dr. William H. Moore, Jr., HomMD, Esq.
Savannah, Georgia.


Posted by Health Freedom of Choice Blog at 9:15 AM No comments:

INFOGRAPHIC
Vitamin Consultancy: Pulling It All Together

Posted by Health Freedom of Choice Blog at 7:20 AM No comments:

I am hosting a live online webinar this Saturday morning at Vital Connections University. Yes, it will be archived.

You can sign up here. You should just do it; get yourself ready for the coming year!

Posted by Health Freedom of Choice Blog at 5:19 PM No comments:

Posted by Health Freedom of Choice Blog at 5:12 PM No comments: